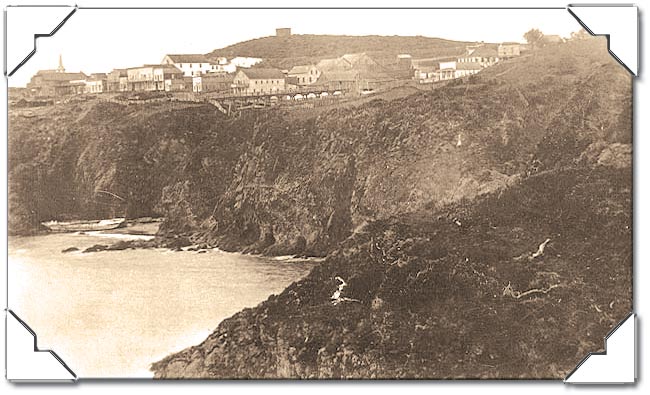 Notice the shipwreck in the cove - It was a hard life
Cuffy's Cove was the first settlement north of Fort Ross. Established with farms and the first saw mill, long before Mendocino was established. In fact, when Ford (main founder of Mendocino) was driving mules and oxen up the coast to establish the sawmill in Mendocino he was impressed by two colorful characters and their farm. Natanial Smith partnered with Francisco Faria, known as Portuguese Frank, were the first settlers in the area. Both later claimed that they were the first two non-natives to live on the coast.

There's two versions of how the area became called Cuffy's Cove. Most commonly retold is the story of a New England whaling ship come ashore for provisions. Three Australian shipmates met Nat (a black man) and called it Cuffy's (Aussie slang for Negro) Cove. The other story cites that Cuffy (common nickname for a bear at that time) referred to the plentiful bears. Some of the first settlers were trappers & hunters, who came for the bear, elk and otters.

Along a bend on the Elk coast called Cuffeys Cove, stands a Catholic cemetery where many of the towns early residents are buried. Its a peaceful spot that looks out on the water and deep into Elks rich past.